This year in early May I had to go on a business trip to Barcelona. I was supposed to meet an author/director and go see the premiere of his new play, also I had to meet another associate. But that was basically it, and as I stayed almost four days, I had enough spare time. It’s been more than ten years I had been to Barcelona, and I was looking forward to spending some time in the sun and in a city that has actual old quarters like the Barrí Gotic, where I stayed at in a hostel.

On our way from the airport to Placa Catalunya, the bus drove past the old arena, which was closed down in 2011, I believe. I was sad I would probably never be able to witness a bull fight. My mood changed though when I arrived at Placa St. Josep Oriol in the Barrí Gotic; I left my stuff in my room and went to the Boquería market in Raval to have paella. In the evening I went to Café Royale to see some flamenco; the singer was amazing, and although the dancer did only two numbers, it was enough to leave me excited. He had a very energetic style of dancing which I really liked. This is when it started. I was agitated and wanted more. I don’t know. I was obsessed.

Next morning I had an appointment which was OK; I sat through it politely. Afterwards I walked the city; I can’t even remember where exactly I went but I went everywhere on foot and had sore feet, which I noticed only the next day. In the evening I decided go see another flamenco show of which I knew it was a tourist rip-off, but I still went, ‘cause you never know if nevertheless there might be a good artist.

There were three half-hour shows in a row and the guests had to leave immediately after the show so the next group could take their seats. I chose the last show at 10.30 p.m. I didn’t feel like looking for a free place at some table so I sat at the bar with the gypsies. It was OK; I had a good view of the stage. The girl dancer was quite alright, but the guy I disliked. He moved like a ballet dancer, his face looked ridiculous and I was left untouched besides feeling some sort of disgust. I don’t know, to me he was just ugly to watch, although his technique of course was perfect. The singer, the cantaor, was called el Pirata and he looked like a pirate, too. He sang a Taranto which really compensated the emptiness the dancer caused in me. This beautiful letra “ya no puedo más”, he sang it with his whole being.

After the show I was already feeling senseless and decided I needed a drink. I had heard of Bar Marsella in Raval; Hemingway used to drink there. I never had dared to go because I thought it would be a crowded tourist hangout. But that night I thought to myself: ‘To hell with it, I want to drink absinth.’ So I walked to Raval breathlessly, almost running. I was in kind of a nervous state and just wanted to get there quickly. On my way I noticed some whores whispering to policemen who looked like pimps instead of the arm of the law. Only God knows what kind of business they were discussing.

When I arrived at Bar Marsella, I felt peaceful. It was quiet and almost nobody was sitting in the bar. The door was open so the mild breeze could enter, too. I chose a table and ordered absente. I had wanted to sit at the bar, but there’s no bar stools in Bar Marsella. I guess the bar tenders want to be left alone. Which is fine with me. There were three men behind the bar. One looked Cuban, he brought me my drink. A tall, slim, elegant appearance. The other one looked Polish to me. He was built-up and had very short hair. He was grinning constantly, mockingly. What appeared to be the boss, I think he was American, probably of Irish descent, but I’m not sure. They all sure as hell fit in into the interior of the bar.

The auburn wall color is chipping off the ceiling. The mirrors are clouded, and the floor tiles have seen better times. Although I must say they are very beautiful, they have this old Spanish pattern which I really like. I think nobody ever cared to wipe the chandeliers; the dust has become solid in fragile sculptures which surround the original form of the chandeliers. There’s a huge brown ceiling fan and four small, white fans on the left wall; the white fans are the only modern detail. There’s two old original signs from the nineteenth century; one says “Prohibido estacionarse en las mesas” and the other one “Prohibido cantar” – it’s forbidden to stand up on the tables and it is forbidden to sing. Also there is the announcement “Reservado el derecho de admisión”. I guess there was some kind of face check already back in the eighteen-hundreds.

After I had finished my absinth, I felt hungry and decided to go grab something to eat. I was super-drunk. I stumbled through Carrer de St Pau and gave light to a guy who complained about the fact that nobody was smoking anymore these days. I continued lurching over the Ramblas, thinking that I should maybe try and catch a bus or train to Andalusia. But instead, I had a bocadillo with awful cheese on it. I don’t know how I got back to my room.

At Bar Marsella I didn’t dare to take pictures. But I took several photos in Raval close to the bar; here’s one. 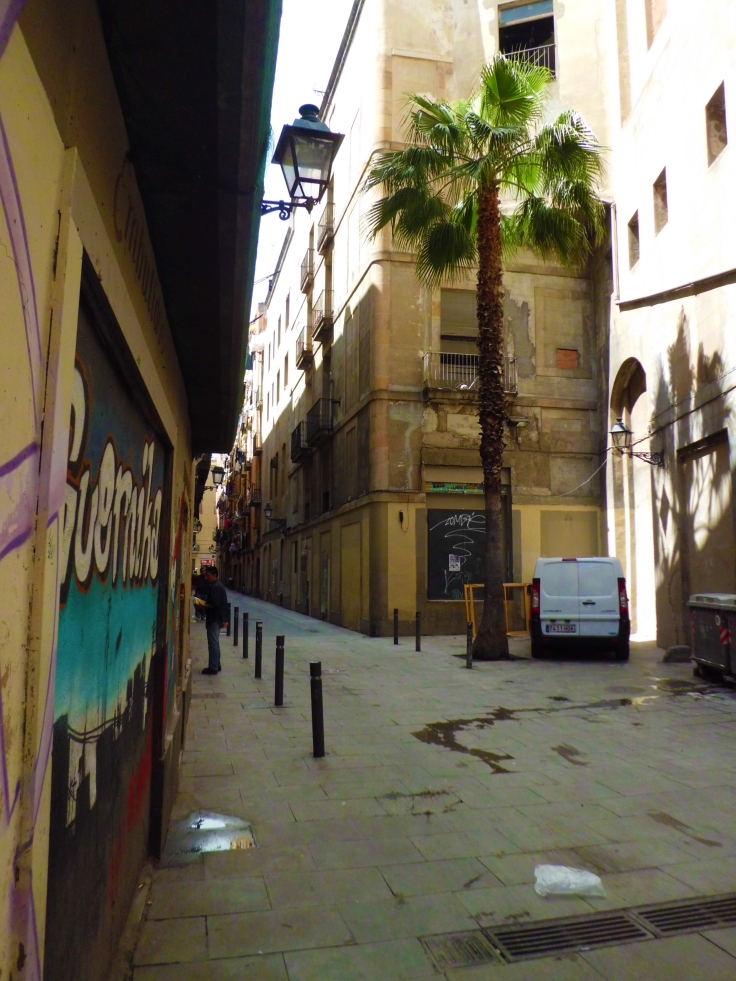 6 thoughts on “Stumbling through Raval”